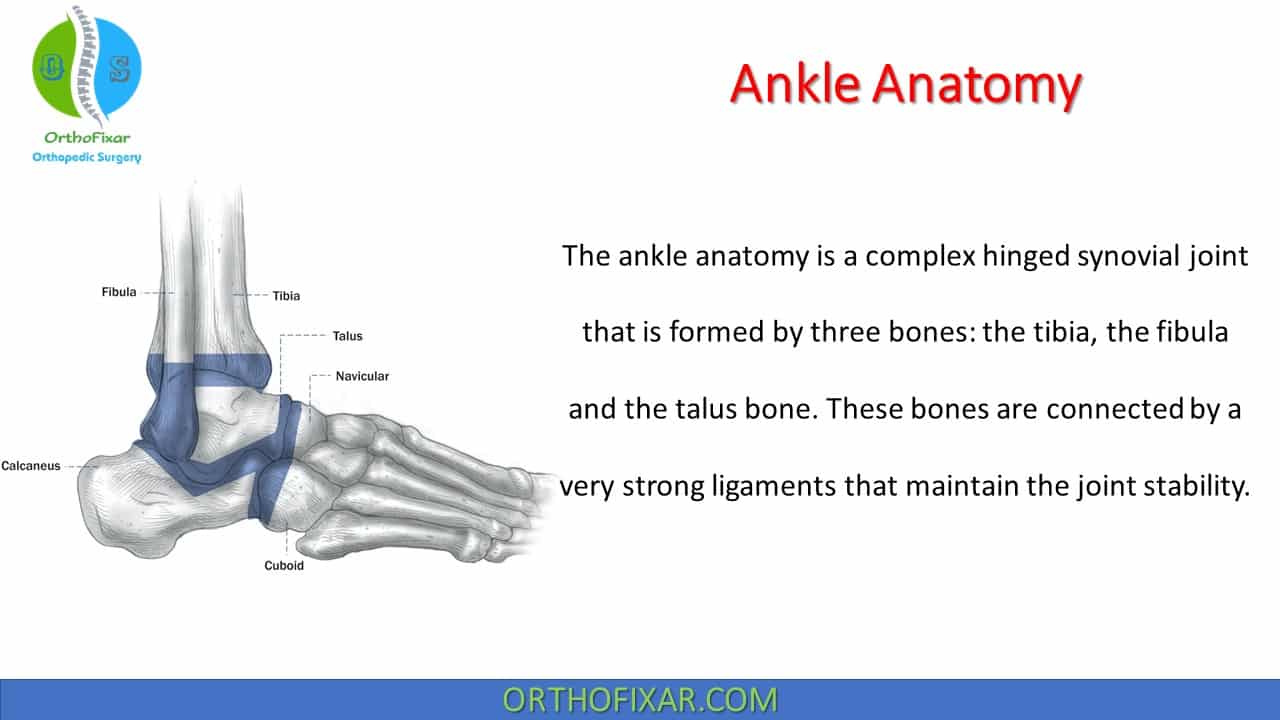 The ankle anatomy is a complex hinged synovial joint that is formed by three bones: the tibia, the fibula and the talus bone. These bones are connected by a very strong ligaments that maintain the joint stability.

Ankle joint if formed by:

The ankle mortise is formed by:

Motions at ankle joint are:

The distal tibiofibular joint is classified as a syndesmosis, except for approximately 1 mm of the inferior portion, which is covered in hyaline cartilage.

The joint consists of a concave tibial surface and a convex or plane surface on the medial distal end of the fibula. There is an elongation into the joint by the synovium of the talocrural joint, the fibers of which are oriented inferiorly and laterally.

The fibula serves as a site for muscular and ligamentous attachment, providing stability for the talus at the talocrural joint.

The tibia is the second longest bone of the skeleton and is a major weight-bearing bone.

As at the proximal tibiofibular joint, support for this joint is provided primarily by ligaments.

The Tibiofibular joint is stabilized by four ligaments, collectively known as the Syndesmosis ligaments , these include:

The inferior interosseous ligament is the primary stabilizer of the Tibiofibular joint.

The Special tests to identify a Syndesmosis ligaments injury include external rotation test and squeeze test.

The tibiotalar joint is the articulation between the talus and the distal tibia. The talus serves as the link between the foot and the leg through the ankle joint and functions to distribute the body weight posteriorly toward the heel and anteriorly to the midfoot.

The talus is divided into an anterior head and a posterior neck and body:

The fibrous capsule of the ankle joint is relatively thin on its anterior and posterior aspects. It is lined with synovial membrane and reinforced by the collateral ligaments.

No tendons, with the exception of a small slip from the posterior tibialis, attach to the talus. However, the talus serves as the attachment for many ligaments.

The talus receives its blood supply from the branches of the anterior and posterior tibial arteries and is very susceptible to aseptic necrosis, particularly with proximal fractures.

The most important ligaments of the Tibiotalar joint can be divided into two main groups: lateral collaterals and medial (deltoid) collaterals.

The anterior talofibular ligament (ATFL) is an intracapsular structure and is approximately 2–5-mm thick and 10–12-mm long.

The ATFL requires the lowest maximal load to produce failure of the lateral ligaments, although it has the highest strain of failure in that group.

This ligament is tested by anterior drawer test of the ankle

The calcaneofibular ligament (CFL), an extra-articular structure covered by the fibular (peroneal) tendons, is larger and stronger than the ATFL. It fans out at 10–40 degrees from the tip of the lateral malleolus to the lateral side of the calcaneus, paralleling the horizontal axis of the subtalar joint.

This ligament effectively spans the ankle and subtalar joints, which have markedly different axes of rotation. Thus, its attachment is designed so that it does not restrict motion in either joint, whether they move independently or simultaneously.

As the ankle joint passes from dorsiflexion to plantarflexion, the CFL is less able to resist talar tilt to inversion, although the ATFL is more able to resist this tilt.

The posterior talofibular ligament (PTFL) is the strongest of the lateral ligament complex, and serves to indirectly aid talofibular stability during dorsiflexion due to its anatomic location, where it can act as a true collateral ligament and prevent talar tilt into inversion.

The PTFL is rarely injured except in severe ankle sprains. The ligament is coalescent with the joint capsule, and its orientation is relatively horizontal. Its attachment on the talus involves nearly the entire nonarticular portion of the posterior talus to the groove for the flexor hallucis longus (FHL) tendon, and anteriorly to the digital fossa of the fibula, which transmits the vessels that supply the talus and the fibula.

This ligament is tested by Posterior drawer test of the ankle

The lateral talocalcaneal interosseous (LTCIL) ligament is sometimes included in this group as it does play a role in lateral ankle and subtalar stability (see Talocalcaneal Ligaments).

The medial collateral ligaments form a triangular-shaped ligamentous structure known as the deltoid ligament of the ankle which consists of both superficial and deep fibers.

The superficial fibers of deltoid ligament consist of the following:

The deep fibers of deltoid ligament consist of the following:

The strength of the ankle ligaments from weakest to strongest is the ATFL, PTFL, CFL, and deltoid complex.

The ankle joint sustains the greatest load per surface area of any joint of the body. Peak vertical forces reach 120% of body weight during walking and they approach 275% during running.

The joints and ligaments of the ankle and foot complex act as stabilizers against these forces and constantly adapt during weight-bearing activities, especially on uneven surfaces. It is estimated that an average 180-lb man absorbs 76.2 tons on each foot while walking 1 mile and that the same man absorbs 121.5 tons per foot while running 1 mile.

Approximately 60% of this weight-bearing load is carried out by the rearfoot, and 28% by the metatarsal heads.

Although the ankle and foot complex normally adapts well to the stresses of everyday life, sudden or unanticipated stresses to this region have the potential to produce dysfunction.

Rotator Cuff of the Shoulder