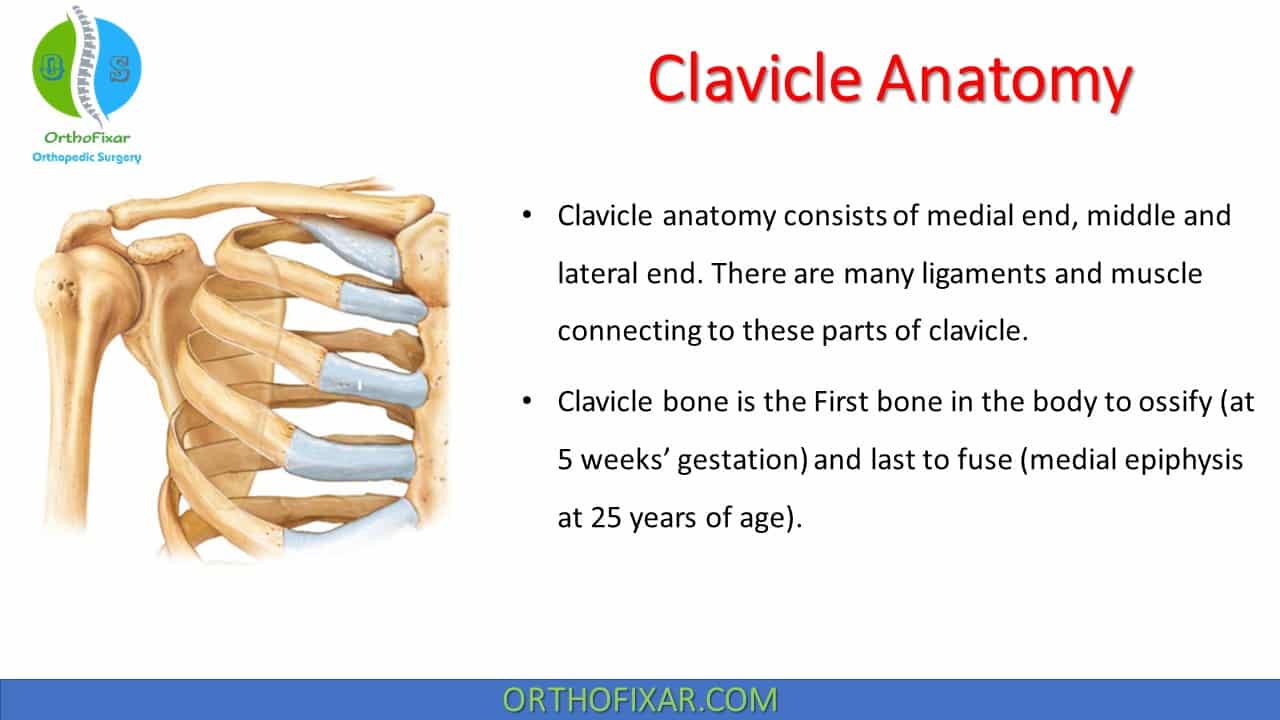 Clavicle anatomy consists of medial end, middle and lateral end. There are many ligaments and muscles connecting to these parts of clavicle.

Clavicle bone is the First bone in the body to ossify (at 5 weeks’ gestation) and last to fuse (medial epiphysis at 25 years of age).

Ligamentous Anatomy of the clavicle:

Laterally the clavicle articulates with the acromion bone.

Muscular Anatomy of the Clavicle

Medially: the pectoralis major muscle originates from the clavicular shaft anteroinferiorly, and the sternocleidomastoid originates superiorly.

Laterally: the pectoralis origin merges with the origin of the anterior deltoid, while the trapezius insertion blends superiorly with the deltoid origin at the lateral margin.

The medial clavicular fragment is elevated by the unopposed pull of the sternocleidomastoid muscle.

while the distal fragment is held inferiorly by the deltoid and medially by the pectoralis major.

The platysma or “shaving muscle” is variable in terms of thickness and extent, but usually envelopes the anterior and superior aspects of the clavicle and runs in the subcutaneous tissues, extending superiorly to the mandible and the deeper facial muscles.
It is divided during the surgical approach, and is typically included in the closure of the superficial, or skin/subcutaneous layer.

Neurovascular Anatomy of the Clavicle

Sternoclavicular joint It forms from clavicle laterally and the sternal bone medially.

It’s a double gliding with an articular disc.

Sternoclavicular joint is the only true joint connecting upper extremity with axial skeleton.

Posterior sternoclavicular ligament is the strongest and primary restraint to anteroposterior instability.

It Rotates 30 degrees with shoulder motion.

Acromioclavicular AC joint is a Plane/gliding joint with a fibrocartilaginous disc.

When the arm is maximally elevated, about 5 to 8 degrees of rotation is possible at the AC joint, although the clavicle rotates approximately 40 to 50 degrees.


Previous Extensor compartments of the wrist

Next Rotator Cuff of the Shoulder