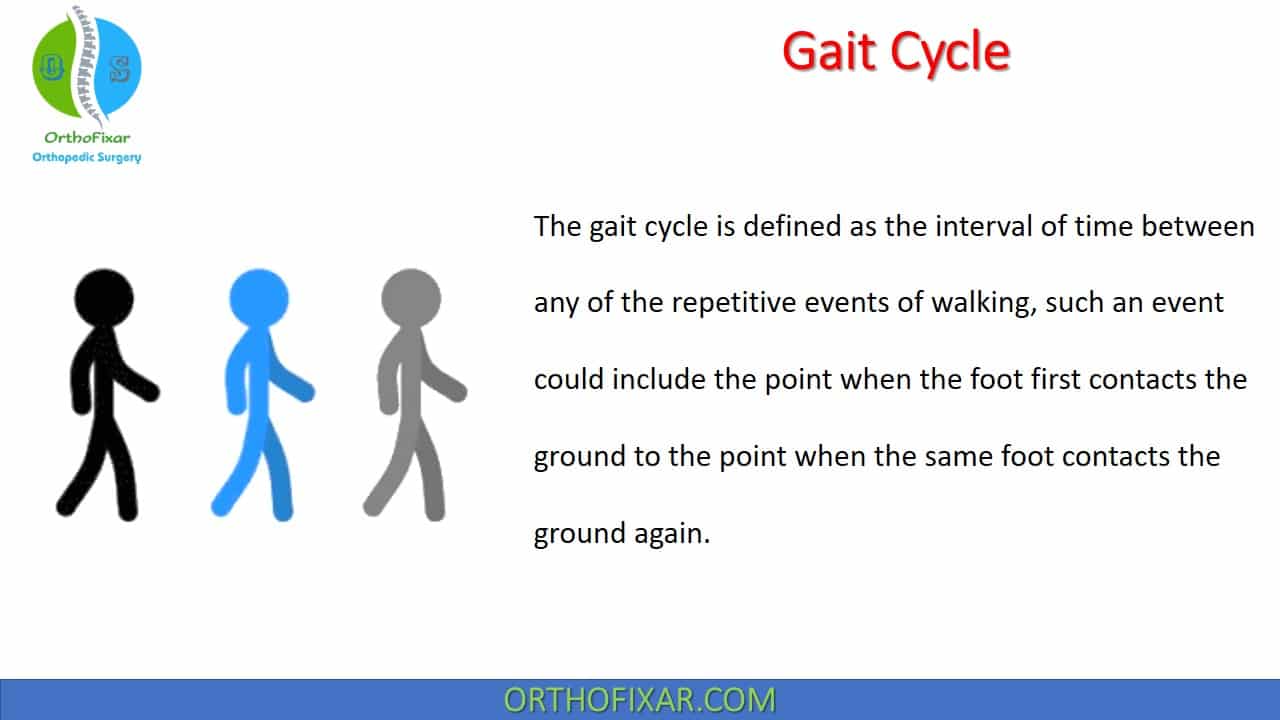 Learning and understanding gait cycle is very important in evaluating lower limb problems, as much can be learnt by carefully studying the way the patient walks and moves. It is not clear whether gait is learned or is preprogrammed at the spinal cord level.

Stride length: it’s one full gait cycle from heel strike to another heel strike. It’s measured from initial contact at the start of stance to the next initial contact of the same foot. Each stride is composed of a stance phase and a swing phase.
The average stride length for normal adults is 144 m (56 in.).

Step Width: The step width is the distance between both feet. The normal step width, which is considered to be between 5 and 10 cm (2–4 in.).

Walking: it’s a period of double limb support in addition to always having one foot in contact with the ground throughout the gait cycle.

Stance Phase: it’s the period of time when the foot is on the ground, in which the leg accepts body weight and provides single limb support. It’s 60% of one gait cycle.

Swing phase: it’s the period of time that the foot is off the ground, in which the limb advances forward.

There are two peaks of ground reaction force during the gait cycle:

Newton’s third law states that for every action there is an equal and opposite reaction.

A decrease in step or stride length may also result from a forward head posture, a stiff hip, or a decrease in the availability of motion at the lumbar spine.

The decrease in step and stride length that occurs with aging is thought to be the result of a number of factors including an overall decrease in joint range of motion, and the increased likelihood of falling during the swing phase of ambulation, caused by diminished control of the hip musculature. This lack of control prevents the aged person from being able to intermittently lose and recover the same amount of balance that the younger adult can lose and recover.

Stance Phase constitutes approximately 60–65% of the gait cycle, and describes the entire time the foot is in contact with the ground and the limb is bearing weight.

The stance phase begins when the foot makes contact with the ground and concludes when the ipsilateral foot leaves the ground.

The stance phase takes about 0.6 seconds during an average walking speed.

Heel Strike is defined as the initial contact of the foot heel on the ground.

Hindfoot is locked/inverted at initial strike allows for energy absorption

The preswing interval begins with initial contact of the contralateral limb and ends with the ipsilateral toe-off.

During this phase, the stance leg is unloading the body weight to the contralateral limb and preparing the leg for the swing phase.

Swing phase is 40% of the cycle. Gravity and momentum are the primary sources of motion for the swing phase. Within the swing phase, one task and three intervals are recognized.

The trunk center of gravity of body mass is located just anterior to T10, which is 33 cm above the hip joints in an individual of average height (184 cm).

The body’s line of gravity is anterior to S2 and provides a reference for the moment arm to the center of joint under consideration. the resulting gait pattern resembles a sinusoidal curve.

During normal walking, the body’s center of gravity is subject to both vertical and lateral displacement. Minimizing trunk displacement optimizes energy expenditure during bipedal gait.

In the sagittal plane of the body, vertical displacement follows a sinusoidal curve with amplitude of 5 cm.

Lateral displacement also follows a sinusoidal curve, with an amplitude of 6 cm.

There are six determinants of gaits that work in concert to minimize vertical and lateral displacement during normal walking. These six determinants also represent the six degrees of freedom of gait and are defined by the flexion and extension of each of the three joints involved in gait (hip, knee, ankle).

Pelvic rotation: During forward motion, the pelvis externally rotates from initial contact to onset of preswing, and internally during preswing and swing. This symmetric net rotation minimizes the total vertical plane displacement needed for limb retraction and advancement in swing and stance.

Foot and ankle motion: through subtalar joint, damping of loading response occurs, leading to stability during
midstance and efficiency of propulsion at push-off.

Knee motion: knee works together with foot and ankle to decrease necessary limb motion. The knee flexes at initial contact and extends at midstance.

Lateral pelvic displacement: relates to transfer of body weight onto limb. Length of motion is 5 cm over the weight-bearing limb, narrowing the base of support and increasing stance-phase stability.

Muscle weakness or paralysis: decreases ability to normally move a joint through space. Walking strategies develop on the basis of the specific muscle or muscle groups involved and the ability of the individual to acquire a substitution pattern to replace that muscle’s action.

Pain in a limb: creates an antalgic gait pattern in which the individual shortens stance phase to lessen the time the painful limb is loaded. The contralateral swing phase is more rapid.

Joint abnormalities: alter gait by changing the range of motion of that joint or producing pain.

During swing phase, there is no ‘pick up’ of the foot so it effectively ‘drops’ into equinus; if the foot was not lifted higher than usual to accommodate this, the toes would drag along the floor.

This could be due to a bilateral foot drop or it may signify problems with balance or proprioception.

Ataxia produces a more obvious and irregular loss of balance, which is compensated for by a road-based gait, or sometimes uncontrollable staggering.

Dystonia refers to abnormal posturing (focal or generalized) that may affect any part of the body and is often aggravated when the patient is concentrating on a particular motor task such as walking.

Crutches and canes are devices that ameliorate instability and pain, respectively.

A cane helps shift the center of gravity to the affected side when the cane is used in the opposite hand. This decreases the joint reaction of the lower limb and reduces the pain