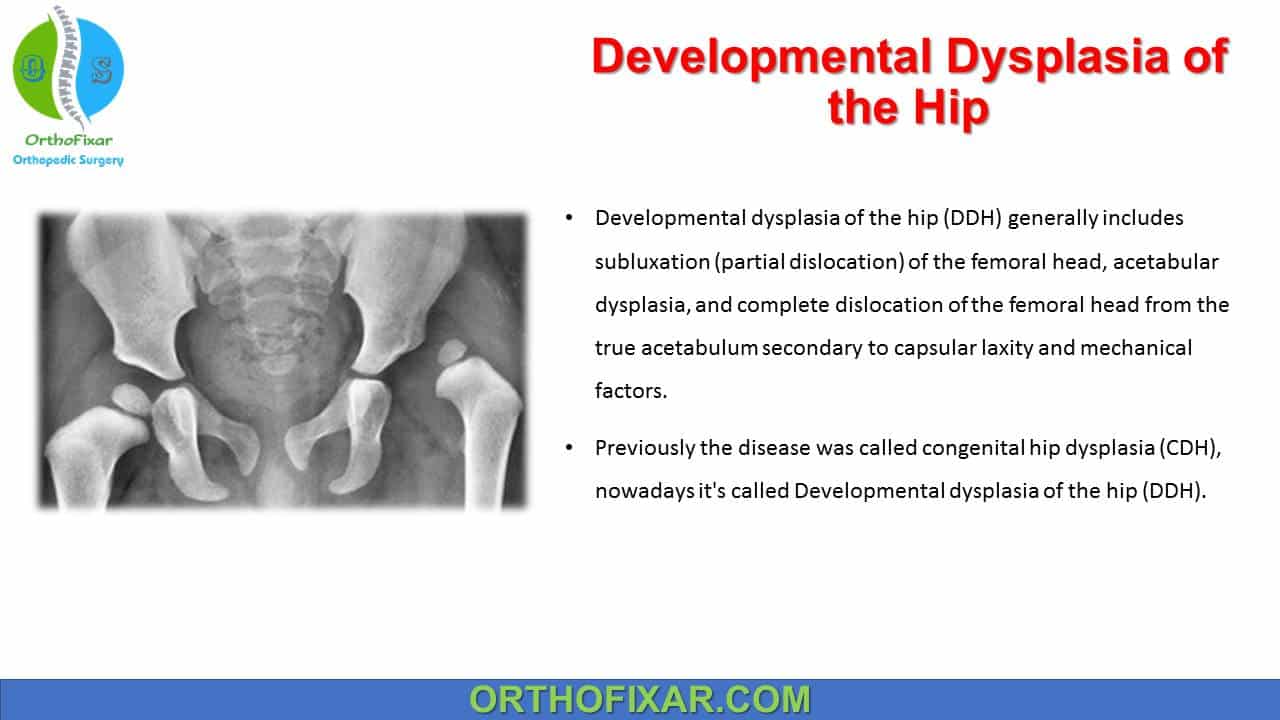 The word developmental invokes the dimension of time, acknowledging that the dysplasia or dislocation may occur before or after birth, while dysplasia means an abnormality of development and encompasses a wide spectrum of hip problems.

Instability is the inability of the hip to resist an externally applied force without developing a subluxation or dislocation.

A subluxation is an incomplete dislocation with some residual contact between the femoral head and acetabulum.

A dislocation indicates complete displacement of the femoral head from the acetabulum.

The etiology of DDH is felt to be multifactorial, including both mechanical and physiological factors.

In utero, the hip is in a position of flexion and abduction that results in a tightened iliopsoas tendon and anterior–lateral orientation of the acetabulum.

The tight iliopsoas may push the femoral head out posteriorly with hip extension during kicking. The labrum (cartilaginous rim of the acetabulum) becomes everted and flattened.

In contrast, if a subluxation or dislocation persists, the femoral head becomes flattened on the posteromedial surface, the acetabulum becomes shallow and dysplastic, and femoral anteversion gradually increases. In addition, the muscles surrounding the hip may shorten and contract.

Several risk factors should arouse suspicion of Developmental Dysplasia of the Hip:

Developmental Dysplasia of the Hip is associated with multiple congenital deformities:

Physical examination of Developmental dysplasia of the hip (DDH) varies based on the age of the child.

The most commonly used lines of reference are the:

Normally, the femoral head lies within the inner lower quadrant of the reference lines noted by Perkins and Hilgenreiner.

DDH Treatment is based on the child’s age:

Ortolani-positive hips (dislocated but reducible): Should be treated with Pavlik harness.

Several series have documented the results of harness treatment. A review of a large European series of patients found that 95% of initially dysplastic hips were normal after treatment.

Obstacles to reduction in developmental dysplasia of the hip:

If the growth plate is open:

If the growth plate is closed:

Pelvic Osteotomy in treatment of developmental dysplasia of the hip:

Lunotriquetral Ballottement Test also called Reagan Test, it is used to evaluate the integrity of the lunotriquetral ligament…