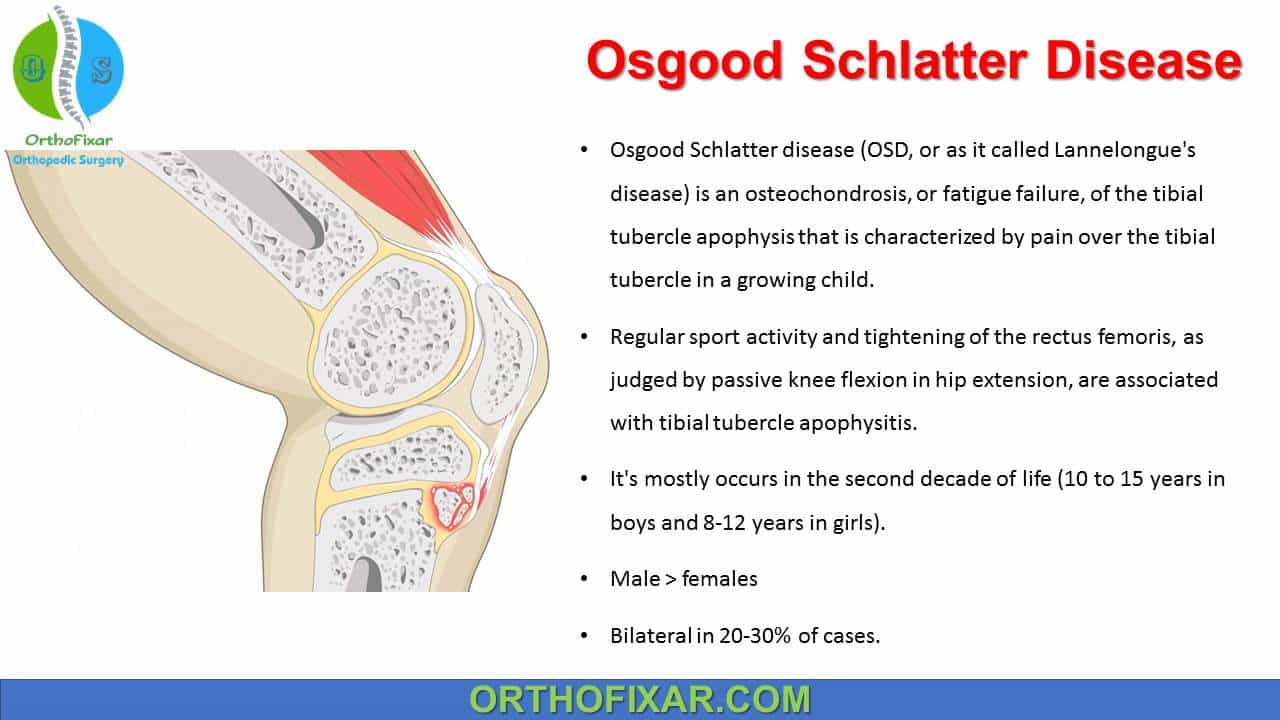 Regular sport activity and tightening of the rectus femoris, as judged by passive knee flexion in hip extension, are associated with tibial tubercle apophysitis.

The first descriptions were by Osgood in 1903 and by Schlatter the same year1.

Tibial tubercle forms the proximal front side of the tibia, it serves as an insertion for the patellar tendon (function as extensor mechanism of the knee joint).

Tibial tubercle apophysis is a secondary ossification center that appears as following:

The symptoms of Osgood Schlatter Disease include:

The examination reveals point tenderness directly over the tibial tubercle and the distal portion of the patellar tendon., pain in the area is produced by resisted knee extension.

The natural history is one of persistence for months to years during adolescence, with subsequent gradual resolution.

Occasionally symptoms will persist after skeletal maturity, particularly an inability to kneel comfortably. Fragmentation of the tibial tubercle on radiographs has been associated with prominence of the tubercle and continued symptoms at follow-up.

Plain AP and lateral radiographs are usually the only diagnostic studies necessary to evaluate the osgood schlatter disease.

One prospective study has shown an association of patella alta with Osgood-Schlatter disease2.

The treatment of Osgood-Schlatter disease should be conservative and expectant.

Straight leg raise is the most common exercise used in rehabilitation program for Osgood Schlatter Disease.

In this exercise, the patient is asked to straight elevate the limb without flexing the knee to a height of about 12 inches from the ground. This is done for 10 to 15 repetitions in the set of 2. The repetition and sets can be increased accordingly.

Few other exercises are also recommended like: short arc quadriceps for quadriceps release, wall slides or quarter squats for strengthening the hamstrings and gastrocnemius muscle.

Removal of ossicles from the tubercle may occasionally be necessary in patients with persistent, disabling symptoms.

Prominence of the tubercle has been the major complication after surgical management.

Combined ossicle excision and anterior prominence tubercle plasty through a patellar tendon splitting incision at maturity has been reported with good results.

While uncommon, closure of the tibial tubercle with severe genu recurvatum has been reported with untreated OsgoodSchlatter disease.

How do you pronounce Osgood-Schlatter?

Can Osgood Schlatter Disease cause problems later in life?

This condition heals spontaneously when the child’s growth is complete and the epiphysis of the bone fuses. In some cases (10 % of patients), a persistent pain may remain at the site of the tibial tuberosity due to a piece of osteochondral residual from the epiphysis, and we may have to remove it.

No, it’s not. This condition is an inflammatory disease that is caused due to traction on the apphysis of the tibial tubercle. Some researcher said that it could be familial disease.

What is another names for Osgood Schlatter disease?