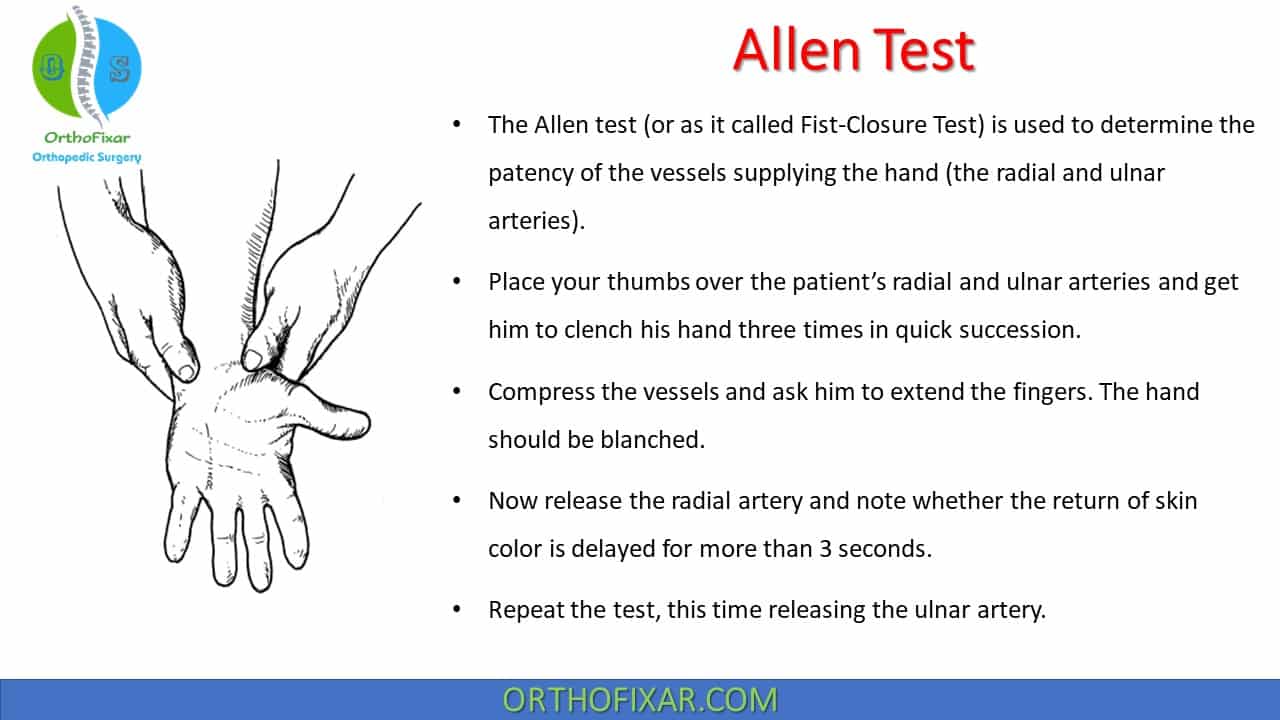 What is the Allen test?

The Allen test (or as it called Fist-Closure Test) is used to determine the patency of the vessels supplying the hand (the radial and ulnar arteries).

How do you perform an Allen test?

The patient is seated with the elbow flexed and forearm supinated, and raises his or her arm above the horizontal plane.

The examiner grasps the patient’s wrist and applies finger pressure to block the vascular supply from the radial and ulnar arteries.

The patient then makes a fist three to four times so as to force the venous blood out of the hand via the posterior veins.

After 1 minute, the patient lets the arm hang down and opens the now pale hand.

The examiner now releases compression, first from one artery then from the other.

This procedure is repeated with the radial artery released and compression on the ulnar artery maintained.

What does a positive Allen Test mean?

Normal filling time is usually less than 5 seconds ( Rapid, uniform reddening of the hand in the areas supplied by the respective arteries).

If the return of color to the palm is significantly prolonged after the release of either artery, the examiner should conclude that perfusion from that artery is reduced ( positive Allen Test ).

One study by Mika Kohonen 1 found that the Allen test is a good and valid screening test for the circulation of the hand:

Similar test can be done in the fingers to assess the digital artery flow (Finger Allen’s test).

The vascular supply to the hand is important to assess before performing a procedure that might injure one of the arteries, such as inserting an arterial line into the radial artery or surgically approaching the scaphoid tubercle from its volar aspect.

In about 80% of normal individuals, the ulnar artery predominates over the radial artery. However, both arteries should be able to perfuse the hand in the majority of individuals.

In this case, the examiner observes the normal resting color of the finger in question and has the patient exsanguinate it by flexing the finger tightly.

The examiner then obstructs both digital arteries by compressing at both sides at the base of the finger.

Because the digital arteries are closer to the volar than the dorsal surface of the fingers, the examiner’s thumbs should be positioned to compress from the volar surface. The patient is then instructed to extend the finger.

The examiner then releases compression from one of the digital arteries and observes the time required for normal color to return to the finger.

As with the Allen test of the hand, the Finger Allen’s test is then repeated for the other digital artery so that the relative contributions of the two vessels can be compared.

The radial and ulnar artery originates from the Brachial artery at the at the level of the radial neck.

Adhesive Capsulitis or Frozen Shoulder is a contracted, thickened joint capsule that seemed to be drawn tightly around…