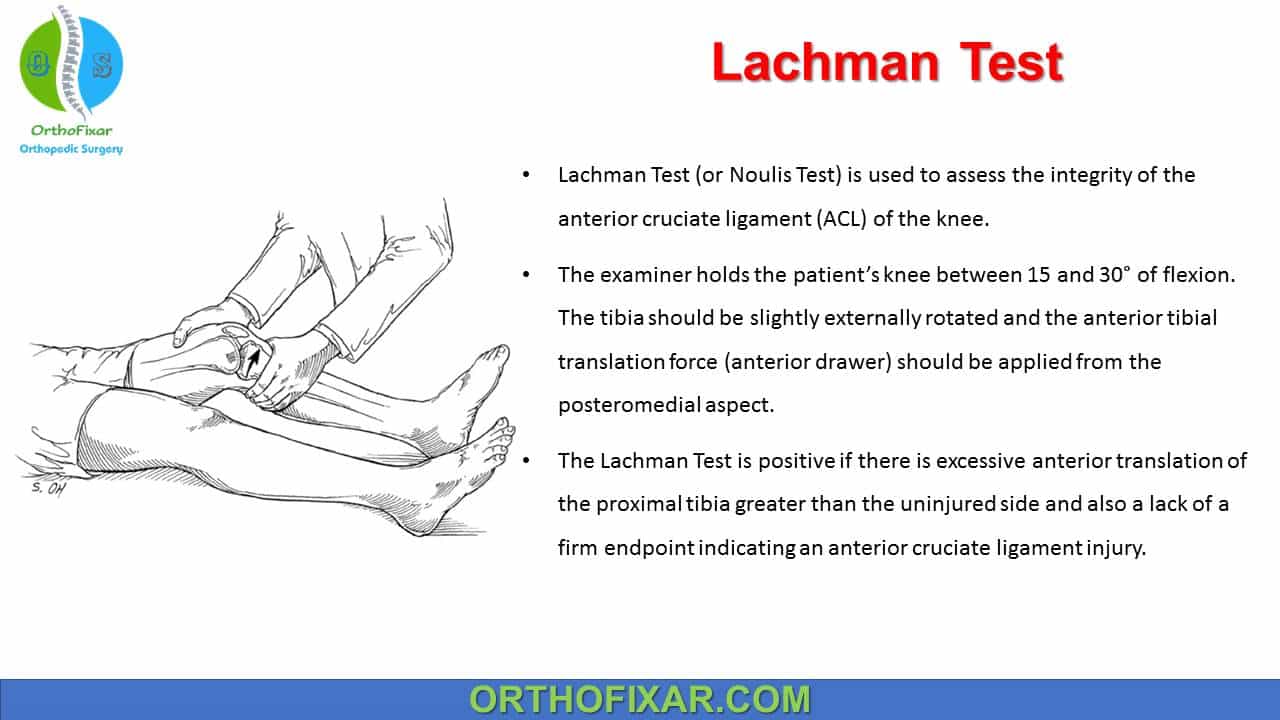 What is Lachman Test?

In his dissertation as early as 1875, the Greek physician George Noulis described the test of the cruciate ligaments in a nearly extended position of the knee, exactly the same test known today as the Lachman test, which was not described or so named until 1976.

How do you perform the Lachman test?

What does a positive Lachman Test mean?

The end point of motion must be soft and gradual without a hard stop; any hard stop suggests a degree of stability of the anterior cruciate ligament:

Cruciate ligament injury should be suspected where the end point is soft or absent.

These discrepancies likely occur as there are a number of factors that can influence the results. These include:

Damage to the cruciate ligament is present where there is demonstrable mobility of the tibia relative to the femur. The motion must have a soft end point. Any hard end point suggests a certain stability of the anterior cruciate. Where this occurs within 3 mm , it suggests complete stability; where it only occurs after 5 mm , it suggests relative stability with previous elongation of the anterior cruciate.

Although the patient is relaxed in the prone position, it is not always easy to assess the quality of the end point:

Where the end point is hard, a posterior cruciate lesion must be excluded by testing the spontaneous posterior drawer and applying the active tests.

The classic Lachman test presents problem’s not only for examiners with small hands, simultaneously immobilizing the thigh and lower leg can also be difficult for any examiner with an obese or muscular patient. Using one’s ow n thigh as a “workbench” for examining the patient’s knee is an easy solution in such cases and one that allows examination even of obese or muscular patients.

The character of the end point (hard or soft) is easier to evaluate in this test.

The patient is supine and grasps the thigh of the affected leg near the knee with both hands and slightly flexes the knee. The patient is then asked to raise the lower leg o the examining table while maintaining flexion in the knee. The examiner observes the position of the tibial tuberosity during this maneuver.

If the ligaments are intact, there will be no change in contour, or only a slight one as the tibial tuberosity moves slightly anteriorly. In an acute injury to the capsular ligaments involving the anterior cruciate and medial collateral ligaments, the examiner will observe a significant anterior displacement of the tibial tuberosity (subluxation of the joint).

This test often allows one to exclude complex injuries without having to touch the patient.

The examiner asks the supine patient to extend the leg in such a way as to lift the foot o the examining table. During this maneuver, the examiner keeps his or her eyes on the knee the better to discern the contours of the tibial tuberosity and patellar ligament. The examiner achieves slight passive flexion in the knee by passing one hand beneath the thigh of the patient’s affected leg and resting it on the contralateral knee. The effect of the quadriceps is increased by immobilizing the foot on the examining table.

This test should only be performed after excluding a posterior cruciate ligament injury, in which the tibia would spontaneously displace posteriorly.

The active Lachman test differs from the traditional Lachman test in that the lower leg can easily be immobilized in various degrees of rotation and the stabilizing effect of the medial and lateral capsular ligaments can be assessed.

A false-negative Lachman test may occur in these situations:

The accuracy and reliability of the Lachman test appears to vary. Katz et al. found that in the hands of an experienced clinician, accuracy of this test was 1:

The sensitivity and specificity of the Lachman test increases to 100% if the patient was anesthetized 2.

The Lachman test has two advantages over the anterior drawer test in 90 degrees of knee flexion:

According to Larson, 4 the Lachman test proved to be the most sensitive test for an ACL rupture. However, this article lacked statistical data to verify this assertion.