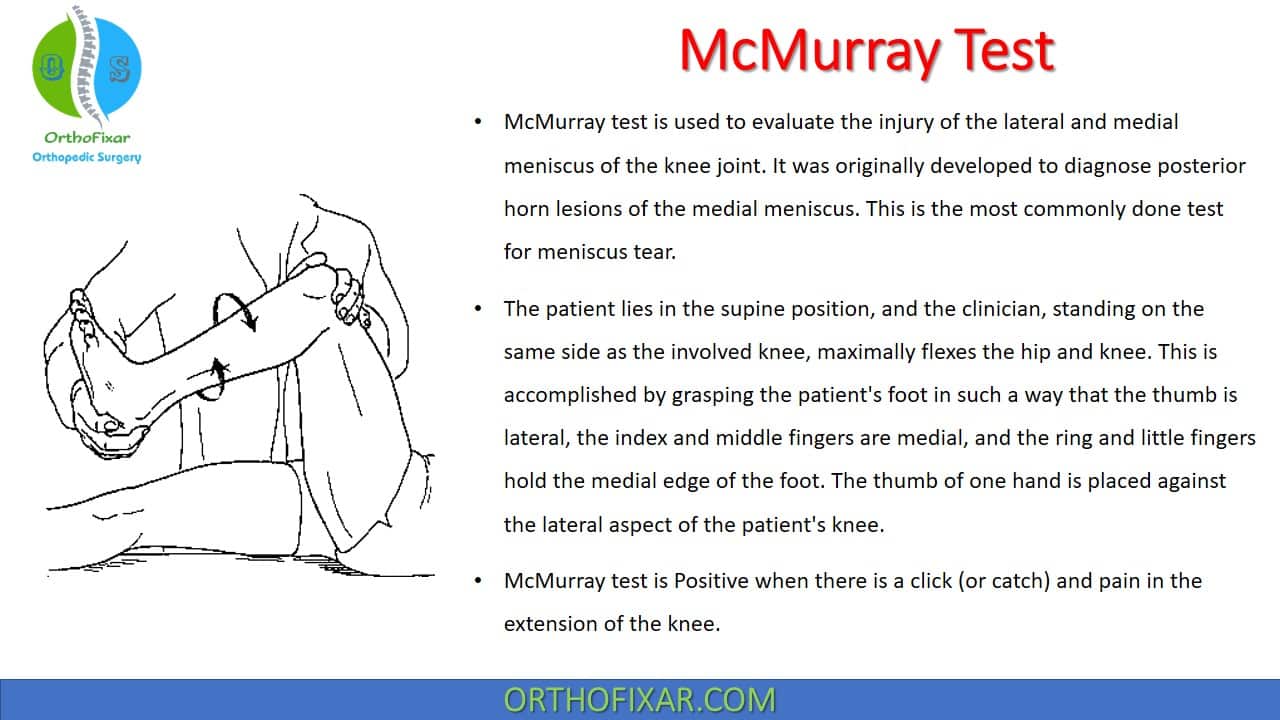 What is McMurray Test?

This is the most commonly done test for meniscus tear.

McMurray Test was first described by Thomas Porter McMurray, who was a British orthopedic surgeon.

How do you perform a McMurray knee test?

The patient lies in the supine position, and the clinician, standing on the same side as the involved knee, maximally flexes the hip and knee. This is accomplished by grasping the patient’s foot in such a way that the thumb is lateral, the index and middle fingers are medial, and the ring and little fingers hold the medial edge of the foot. The thumb of one hand is placed against the lateral aspect of the patient’s knee.

What is a positive McMurray Test?

McMurray test is Positive when there is a click (or catch) and pain in the extension of the knee.

A Meta-Analysis study by Ockert 1 to assess the value of the clinical examination in suspected meniscal injuries, the Sensitivity & Specificity of McMurray Test was:

Another Systematic review and meta-analysis by Eric J Hegedus 2 found that the pooled sensitivity and specificity were 70% and 71% for McMurray test.

In plan view the medial and lateral menisci are C-shaped; they are triangular in cross-section, and formed from dense avascular fibrous tissue.

Their extremities (horns) are attached to the upper surface of the tibia on which they lie; the posterior horn of the lateral meniscus has an additional attachment to the femur, whereas both anterior horns are loosely connected.

The concave margin of each meniscus is unattached; the convex margin of the lateral meniscus is anchored to the tibia by coronary ligaments, whereas the corresponding part of the medial meniscus is attached to the joint capsule) and thereby loosely united to both femur and tibia.

During extension of the knee the menisci slide forwards on the tibial plateau and become progressively more compressed, adapting in shape to the altering contours of the particular portions of the femur and tibia between which they come to lie.

Only the peripheral edges of the menisci have an appreciable blood supply, so that meniscal tears that involve the more central portions have a poor potential for healing.

Varus Test of the knee