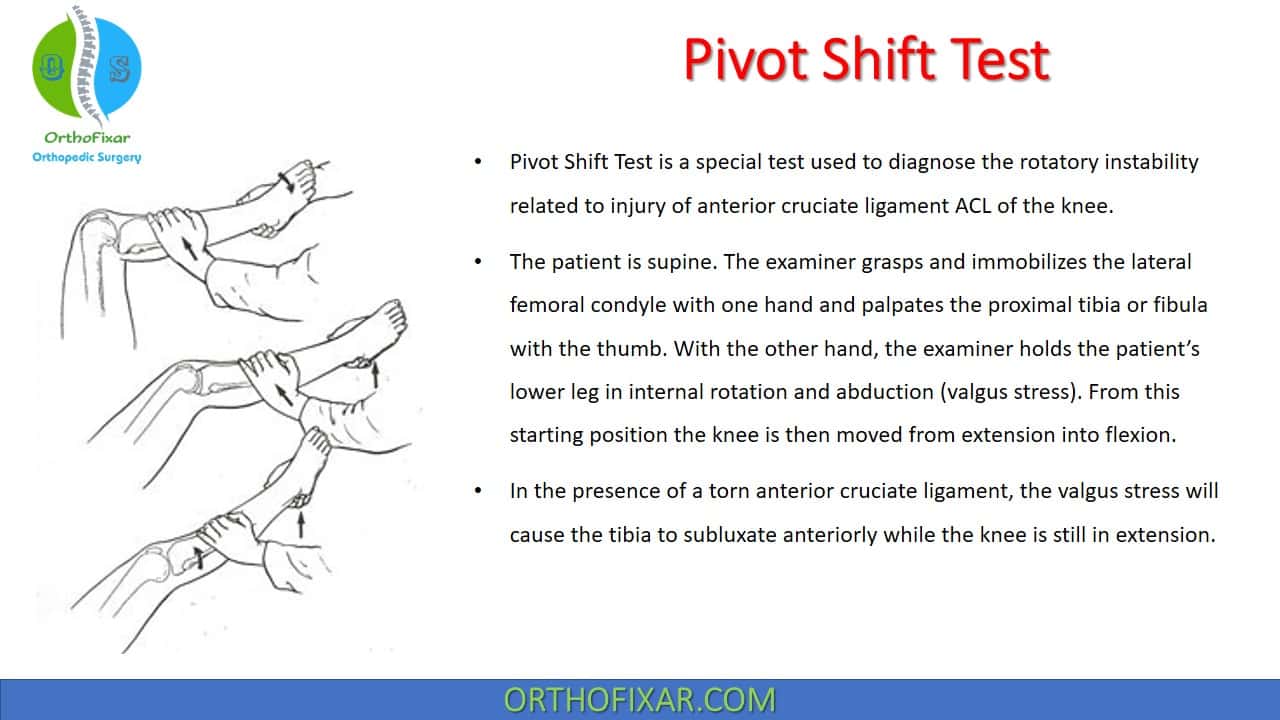 What is Pivot Shift Test?

Pivot shift test is a manipulative and provocative test for demonstrating the rotatory subluxation that is often associated with anterior cruciate ligament injury.

This test was first described by Galway et al.1 in 1972 and has been described since by a number of authors.

How do you perform the Pivot Shift Test?

What does a positive Pivot Shift Test mean?

In a meta-analysis 2 that looked at 28 studies to assess the accuracy of clinical tests for diagnosing ACL ruptures, Benjaminse et al. found the pivot shift test to be very specific both in acute as well as in chronic conditions, and recommended that both the Lachman and pivot shift tests be performed in all cases of suspected ACL injury:

Another comparative study found that the Pivot Shift Test has a sensitivity of 81.8% and specificity of 98.4%.

According to Jakob, a genuine pivot shift phenomenon can partially disappear, despite anterior cruciate ligament insufficiency, under the following conditions:

The procedure is identical to the pivot shift test except that here instability of the knee is assessed with the lower leg not only in internal rotation but also in neutral and external rotation.

How do you perform the Modified Pivot Shift Test?

The patient is supine. With one hand, the examiner holds the patient’s lower leg in internal rotation while the other hand grasps the tibial head laterally and holds it in a valgus position.

In a positive Modified Pivot Shift Test , this alone will produce anterior subluxation of the lateral tibial head. The rest of the procedure is identical to the pivot shift test.

Subsequently flexing the knee while maintaining internal rotation and valgus stress on the lower leg causes posterior reduction of the subluxated tibial head at about 30° of flexion.

The test is performed with the femoral head in abduction and adduction and in each case with the lower leg in external and internal rotation.

In patients with an insufficient anterior cruciate ligament, subluxation is therefore more pronounced in hip abduction than it is in hip adduction, The iliotibial tract contributes directly and indirectly (passively) to stabilizing the lateral knee.

Internally rotating the lower leg and adducting the hip tenses the entire iliotibial tract, which increases tension in the ligament like portion that spans the knee. This tension will prevent anterior subluxation of the tibial head during the pivot shift test in the presence of a torn anterior cruciate ligament.

However, externally rotating the lower leg reduces the tension in the portion of the iliotibial tract that spans the knee, allowing greater anterior subluxation of the tibial head. The degree of subluxation is even greater when the leg is abducted.

The patient is supine. The examiner grasps the patient’s foot with one hand and the calf with the other. First, the examiner alternately flexes and extends the knee carefully, using these norm al everyday motion sequences to alleviate the patient’s anxiety and reduce reflexive muscle tension. The patient’s hip is abducted, and the foot is held in neutral or external rotation.

Next, the examiner gently applies axial after about 3 to 5 flexion and extension cycles. With the hand resting on the calf, the examiner applies a mild anterior stress

Under axial compression and mild anterior stress, slight subluxation will occur as the knee approaches extension, with reduction occurring as flexion increases. By varying the speed of the flexion and extension cycle, the axial com pression, and the anteriorly directed pressure, the examiner can precisely control the intensity of the subluxation and subsequent reduction. In this test, the examiner literally feels his or her way toward the subluxation and reduction.

The soft pivot shift test ensures reduction with minim al pain or even with no pain at all. Carefully performed, this test can be repeated several times without the patient’s complaining of pain.

The examiner immobilizes the patient’s lower leg between his or her forearm and waist to evaluate the medial or lateral translation (tibial displacement) as the knee approaches extension. To assess medial translation, the examiner places one hand on the lower leg slightly distal to the medial joint cavity while the other hand rests on the lateral thigh. While applying a valgus stress to the knee via the lower leg, the examiner presses medially with the hand resting on the patient’s thigh.

Varus Test of the knee