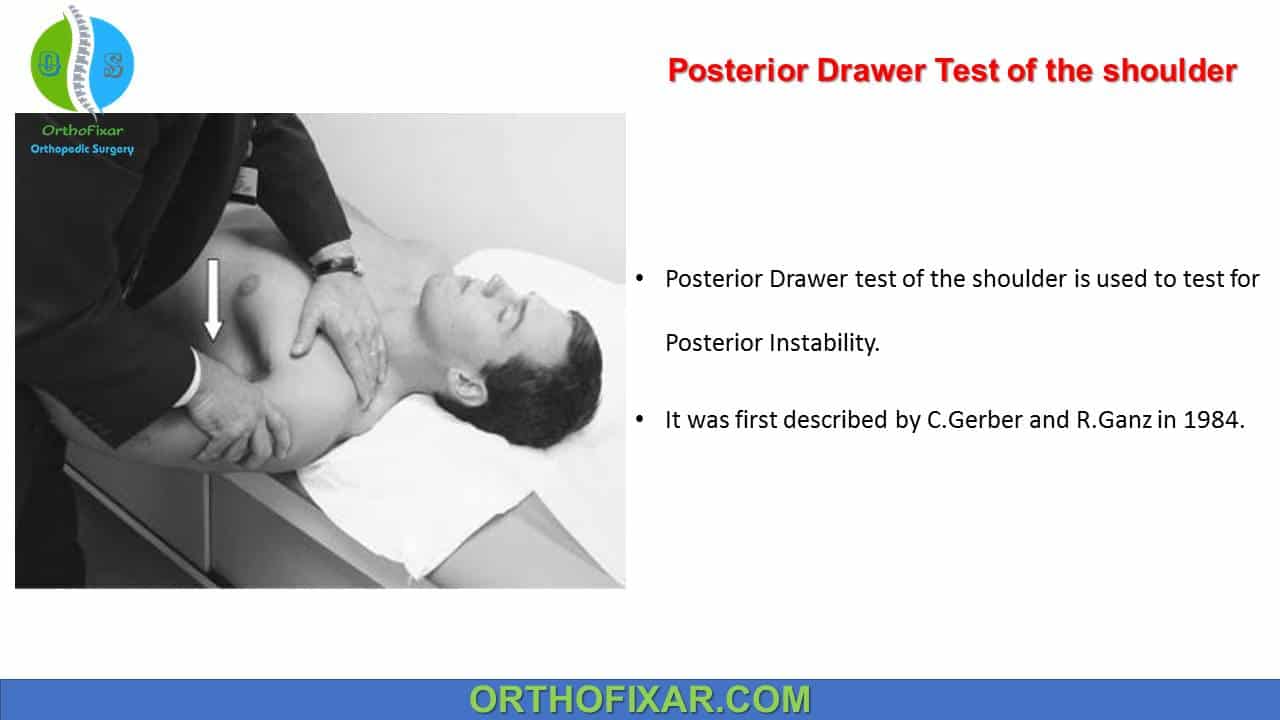 What is Posterior Drawer Test of the shoulder?

Posterior Drawer test of the shoulder is used to test for Posterior Instability. It was first described by C.Gerber and R.Ganz in 1984. 1

How do you perform the Shoulder Posterior Drawer Test?

What does a positive Posterior Drawer Test of the shoulder mean?

The patient is seated with the examiner’s thumbs resting on both the patient’s scapular spines. The examiner’s other fingers rest anterior to the humeral head and exert posterior pressure to trigger a posterior drawer.

The examination may also be performed with the patient seated. With the patient in a relaxed posture bending slightly forward with the arm hanging alongside the trunk, the examiner places his or her thumb on the patient’s scapular spine or posterior glenoid and grasps the humeral head anteriorly. Applying rotation and pressure with the fingers will provoke posterior subluxation of the head where there is sufficient laxity in the capsular ligaments.

In posterior instability, the humeral head can be posteriorly displaced by one-half its diameter.

Posterior instabilities, which are rare and only comprise approximately 2% of all shoulder dislocations, are often associated with seizure, electric shock, diving into a shallow pool, or motor vehicle accidents.

Patients who have a posterior instability pattern typically report symptoms with the arm in a forward flexed, adducted position, such as when pushing open heavy doors.

Posterior dislocations are classified as:

The most characteristic sign for a posterior dislocation is a loud clunk as the shoulder is moved from a forward flexed position into abduction and external rotation, a positive finding that is often misdiagnosed as an anterior dislocation.

The findings for a posterior dislocation are usually severe pain, limited ER, often to less than 0 degree, and limited elevation to less than 90 degrees. There is usually a posterior prominence and rounding of the shoulder as compared to the opposite side, and a flattening of the anterior aspects of the shoulder. Looking down at the patient’s shoulders from behind can best assess these asymmetries

Hawkins Kennedy test (Hawkins test) is used for impingement syndrome of the rotator cuff of the shoulder, it…