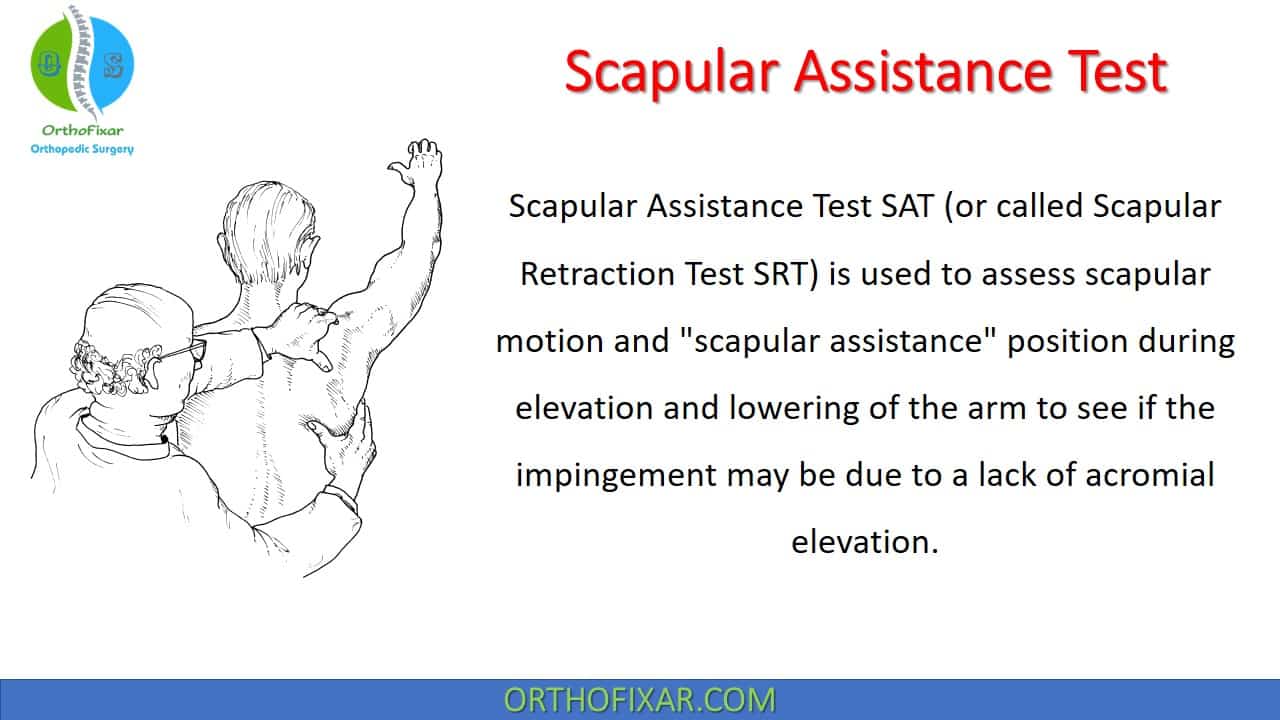 What is the Scapular Assistance Test?

Scapular Assistance Test SAT (or called Scapular Retraction Test SRT) is used to assess scapular motion and “scapular assistance” position during elevation and lowering of the arm to see if the impingement may be due to a lack of acromial elevation.

It’s used to exclude impingement in the subacromial space caused by entrapment or irritation.

How do you perform Scapular Assistance Test?

The examiner stands behind the patient.

What does a positive Scapular Assistance Test mean?

The test is considered positive if there is reduction of pain in the “painful arc” and improved range of motion.

A study by Michael Khazzam for Diagnostic Accuracy of the Scapular Retraction Test in Assessing the Status of the Rotator Cuff, he found that Scapular Assistance Test sensitivity and specificity for diagnosing of full-thickness rotator cuff tears was as following:

A modified Scapular Assistance Test, which included assisting posterior tipping of the scapula in addition to assisting upward rotation of the scapula, was found to possess acceptable interrater reliability for clinical use to assess the contribution of scapular motion to shoulder pain.

The patient is asked to actively elevate his or her arm in the scapular plane, and during the movement the clinician facilitates upward rotation of the scapula by pushing upward and laterally on the inferior angle, as well as tilting the scapula posteriorly by pulling backwards on the superior aspect of the scapula

The Scapular Assistance Test (SAT) is presumed to indirectly measure the function of the scapula rotators; however, other factors, such as thoracic posture and pectoralis minor length, have also been hypothesized to affect scapular rotation, and it is possible that these could be affected by the manual pressure provided during the SAT.

More importantly, the SAT is used to directly assess the influence of scapular motion on shoulder pain.

Disturbances in the scapulothoracic motion sequence usually occur because of muscular imbalance in conjunction with pathology of the gleno-humeral and acromioclavicular joints. This can involve dysfunction from pain as a result of various shoulder disorders or from insufficient eccentric control function by the scapula-stabilizing muscles (trapezius, rhomboids, serratus anterior, and levator scapulae).
One can observe this scapular movement disturbance particularly when lowering the internally rotated arm s from an elevated position, because this movement places significant stress on the eccentric muscles (scapular provocation test).

Wright Test is used for Thoracic outlet syndrome, it's done by passively externally rotate and abduct the patient’s…