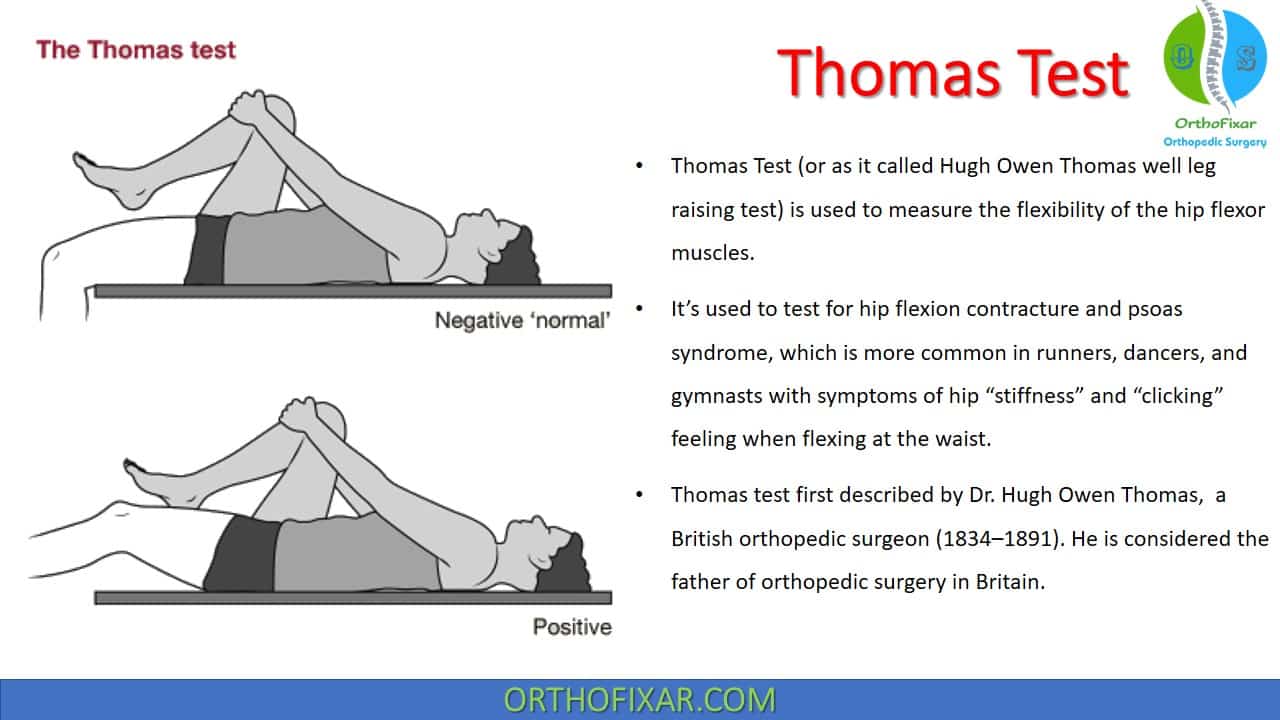 What is the Thomas Test?

Thomas Test (or as it called Hugh Owen Thomas well leg raising test) is used to measure the flexibility of the hip flexor muscles.

Thomas Test is used to evaluate hip flexion contracture and psoas syndrome (Iliopsoas Tightness), which is more common in runners, dancers, and gymnasts with symptoms of hip “stiffness” and “clicking” feeling when flexing at the waist.

The original Thomas test was designed to test the flexibility of the iliopsoas complex but has since been modified and expanded to assess a number of other soft tissue structures.

The hip flexor muscles are (See Below):

How do you perform the Thomas Test?

The original thomas test involves positioning the patient in supine, with one knee being held to the chest at the point where the lumbar spine is felt to flex. The clinician assesses whether the thigh of the extended leg maintains full contact with the surface of the bed.

An increased flexion contracture in the hip can be compensated for by an increase in lumbar lordosis, in which case the patient only appears to assume a normal position.

What does a positive Thomas Test mean?

One of the limitations of thomas test is that it merely determines the amount of hip extension possible at any given degree of pelvic flexion. Another problem is that there are better methods of measuring the flexibility of the iliopsoas complex. For example, positioning the patient in prone, stabilizing the pelvis, and then extending the thigh. The precise point at which the pelvis begins to rise marks the end of the hip motion and the beginning of pelvic and spine motion.

Is the Thomas Test reliable?

Neither the original Thomas Test nor the suggested variations have ever been substantiated for reliability, sensitivity, or specificity1 :

A modified thomas test is commonly used to help eliminate the effect of the lumbar curve.

What does a positive modified Thomas Test indicate?

If the thigh is raised compared to the table, a decrease in the flexibility of the iliopsoas muscle complex should be suspected.

If the rectus femoris is adaptively shortened, the amount of knee extension should increase with the application of overpressure into hip extension.

If the decrease in flexibility lies with the iliopsoas, attempts to correct the hip position should result in an increase in the external rotation of the thigh.

The data illustrated that reliable assessment using the modified Thomas test may be influenced by:

Two things must be remembered when interpreting the results of Thomas Test:

Progressive Fibrosis of the Quadriceps:

The exact cause of progressive fibrosis of the quadriceps is not known. Gunn2 first proposed that it was a sequela of multiple injections of antibiotics into the thigh muscles during early infancy.

The pathophysiology of progressive fibrosis is speculative. It has been proposed that the volume of drug injected in
very young infants compresses the capillaries and muscle fibers and causes muscle ischemia, which leads to fibrotic changes. Local necrosis may occur as a result of focal disruption of fibers at the site of injection. The irritative nature of the injected drug may also play a role in producing fibrosis.

Two different surgical releases have been advocated for the treatment of quadriceps fibrosis:

When the fibrosis is chronic and genu recurvatum is present, skeletal changes may develop in the distal end of the femur where the articular surface points anteriorly. In such cases it may be necessary to perform distal femoral flexion osteotomy to gain knee flexion and maintain joint congruity.