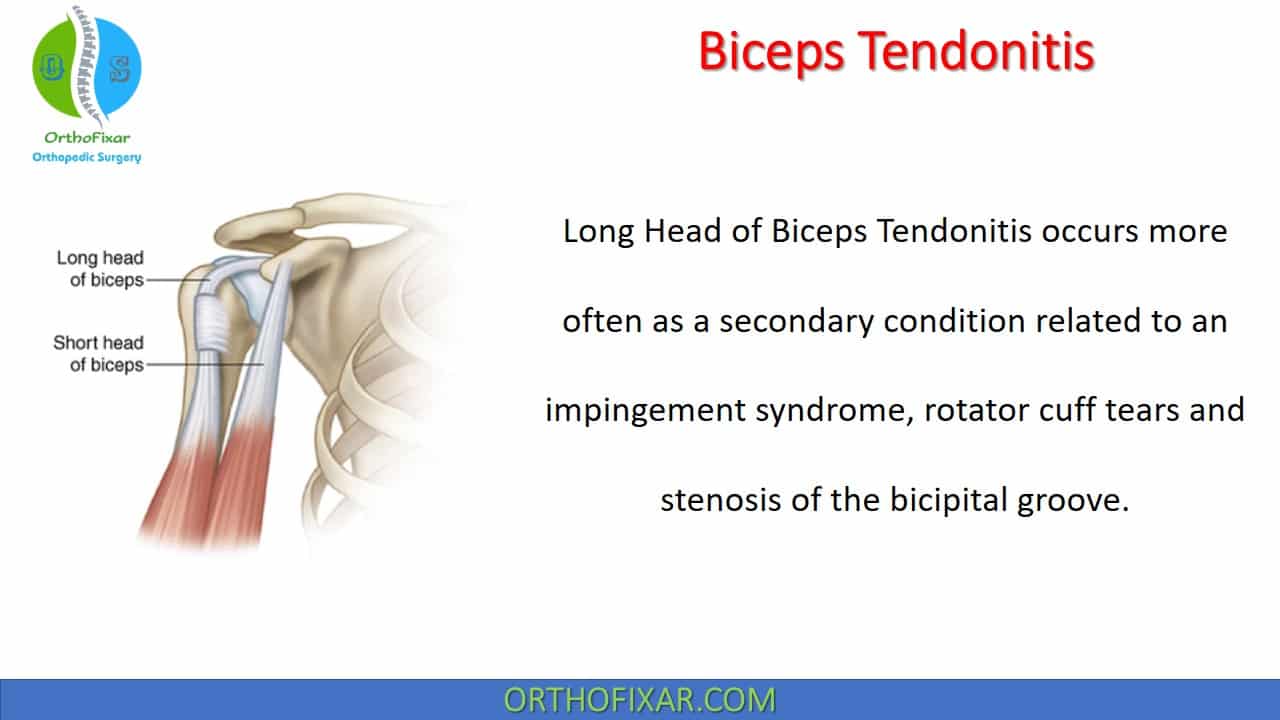 Long Head of Biceps Tendonitis occurs more often as a secondary condition related to an impingement syndrome, rotator cuff tears and stenosis of the bicipital groove.

Long Head of Biceps Tendon originates from the supraglenoid tubercle and superior labrum of the shoulder joint. It’s stabilized within bicipital groove by the transverse humeral ligament.

Long Head of Biceps Tendon acts as a dynamic stabilizer of the humeral head.

The biceps tendon sheath is a direct extension of the G-H joint, and inflammatory conditions such as rheumatoid arthritis can involve the biceps tendon.

Slatis and Aalto described a three-part classification for biceps lesions:

Other researchers have proposed two main categories related to age:

The pain associated with Biceps Tendonitis is typically felt along the anterior lateral aspect of the shoulder with radiation into the biceps muscle, and tenderness is noted directly over the bicipital groove.

Objective findings for this condition include the following:

Every attempt must be made to identify associated lesions (those affecting the glenoid labrum and rotator cuff) or to note any contributing factors (a poorly stabilized scapular, the hypomobile cervical and/or thoracic spine, or altered muscle recruitment patterns).

Ultrasound imaging can show a thickened tendon within bicipital groove.

MRI can show thickening and tenosynovitis of proximal biceps tendon.

The Biceps Tendonitis treatment secondary to chronic impingement is similar to that described for rotator cuff tendinitis. These include:

Biceps Tendonitis Surgical release (with or without Biceps tenodesis) is usually reserved for refractory cases.

Tenodesis may result in “groove pain” if the technique of the tenodesis retains portion of the tendon in the intertubercular groove.

A subpectoral tenodesis technique reduces the risk of groove pain.

The Long Head of Biceps tendon, with its proximal point of exit at a 30–40 degree angle from the straight line of the tendon and the tunnel, swings from one side of the groove to the other during the motions of IR and ER of the humerus.

Biceps Tendon Subluxation is most commonly associated with a partial or complete subscapularis tear.

If the groove is shallow: the tendon may force its way over the lesser or greater tuberosity, tearing the transverse humeral ligament in the process. Repeated subluxation wears down the tuberosity and increases the frequency of the subluxation.

The pain, not often severe, has the same referral pattern as that of Biceps Tendonitis.

A click is typically felt during abduction and ER motions, with reduction of the tendon occurring with adduction and IR.

There is tenderness over the bicipital groove, which follows the groove as the arm is rotated.

On IR, the groove is under the coracoid, and during ER it is at the anteromedial line.

The Biceps Tendon Subluxation treatment depends largely on how important athletics is to the participant.

Conservative treatment involves the temporary avoidance of the pain and click-provoking movements.

In severe cases, surgical intervention may be indicated, which offers excellent results.

The Long Head of Biceps Tendon Tear is usually seen in middle-aged patients, resulting from repeated injections of steroid into the bicipital groove or in cases of chronic impingement.

The tendon is avascular, and as it weakens, it tears with a minimal amount of force.

Patients usually report hearing or feeling a “snap” at the time of the injury.

Typically, rupture is followed by a few weeks of mild-to-moderate pain, followed by resolution of the pain and restoration of normal function.

When attempts are made to contract the biceps, the muscle belly rolls down over the distal humerus, producing a swelling close to the elbow instead of in the middle of the arm: the so-called ” Popeye sign”.

Functional limitations are unusual after this rupture, especially in the older population, because the short head of the biceps remains intact. Typically, there is a negligible loss of elbow flexion and supination strength.

Surgical repair is rarely indicated except in the younger, active population (<50 years).

With or without surgery, a rupture of the LHB increases the risk of developing an supraspinatus impingement syndrome. This results from the short head of the biceps pulling the humeral head upward, without the presence of the long head to hold the humeral head downward.