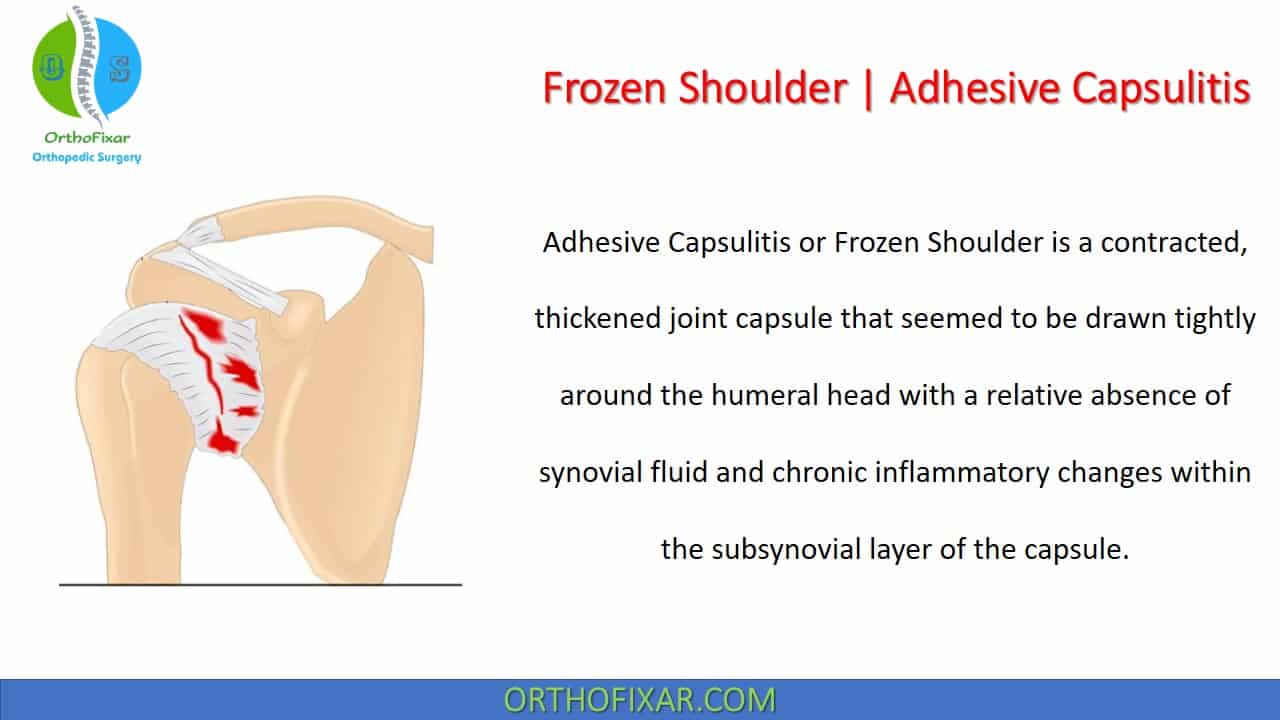 Adhesive Capsulitis or Frozen Shoulder is a contracted, thickened joint capsule that seemed to be drawn tightly around the humeral head with a relative absence of synovial fluid and chronic inflammatory changes within the subsynovial layer of the capsule.

The frozen shoulder syndrome was first described by Duplay in 1872, who used the term periarthritis scapulohumerale. It was not until 1934 that Codman used the term frozen shoulder to describe this condition. In 1945, Neviaser introduced the term adhesive capsulitis to reflect his findings of a chronic inflammatory process at surgery and autopsy.

What are the frozen shoulder causes?

Although the causes of frozen shoulder remains elusive, the understanding of the pathophysiology has recently
improved.

Factors associated with adhesive capsulitis include:

There are 3 stages for adhesive capsulitis, these are:

Patients usually have a gradual onset of diffuse shoulder pain, which is progressive over weeks to months (less than 3 months, duration). The pain usually is worse at night and is exacerbated by lying on the affected side.

The symptoms often mimic those of an impingement syndrome, where restriction of motion is minimal and pain that appears to be due to a rotator cuff tendinitis has been present for less than 3 months.

As the patient uses the arm less, pain leading to stiffness ensues.

In this early stage, the majority of motion loss is secondary to the painful synovitis, rather than a true capsular contraction.

Patients seek pain relief by restricting movement. This heralds the beginning of the stiffness phase, which usually lasts 4 to 12 months. Patients describe difficulty with activities of daily living; men have trouble getting to their wallets in their back pockets, and women have trouble with fastening brassieres. As stiffness progresses, a dull ache is present nearly all the time (especially at night), and this often is accompanied by sharp pain during range of motion at or near the new end points of motion.

This phase lasts for weeks or months, and as motion increases, pain diminishes. Without treatment (other than benign neglect), motion return is gradual in most but may never objectively return to normal, although most patients subjectively feel near normal, perhaps as a result of compensation or adjustment in ways of performing activities of daily living.

Histologically there is evidence of inflammation and fibrosis. There is a dense matrix of type-III collagen containing fibroblasts and myofibroblasts that appear similar to Dupuytren disease.

Arthrography may demonstrate a loss of the normal axillary recess, revealing contracture of the joint capsule.

MRI may demonstrate thickening of the glenohumeral joint capsule along the axillary pouch, thickening of the coracohumeral ligament, obliteration of the subcoracoid fat triangle and rotator interval synovitis. However, none of these are pathognomonic.

Bone scans have been reported to be positive in some patients, and a positive bone scan has been shown to have positive predictive value for treatment with steroid injections.

Clinical improvement has been reported after arthrography because of brisement of adhesions from forcefully injecting fluid into the joint.

Other two causes of selective loss of external rotation are glenohumeral osteoarthritis and a locked posterior shoulder dislocation. For this reason, radiographs must be obtained prior to making a diagnosis of frozen shoulder.

Traditionally, frozen shoulder has been considered a self-limiting condition, lasting 12 to 18 months without long-term
sequelae.

Initial treatment of frozen shoulder is nonoperative, with emphasis placed on control of pain and inflammation. Approximately 90% of patients respond to physical therapy

The primary goal of conservative intervention is the restoration of the ROM and focuses on the application of controlled tensile stresses to produce elongation of the restricting tissues.

Transcutaneous electrical nerve stimulation and ultrasound may be helpful, combined with passive and active range-of-motion exercises.

Closed manipulation under anesthesia has a good results and efficacy. Failures usually are related to inability to maintain postoperative motion rather than intraoperative complications.

Closed manipulation is contraindicated in:

A gradual return of full mobility occurs within 18 months to 3 years in most patients, even without specific intervention.

Patients seeking care earlier usually recover more quickly. Dominant shoulder involvement has been reported to be predictive of a good result, whereas occupation and treatment programs are not statistically significant.

Patients who fail 12 to 16 weeks of nonsurgical treatment and whom closed manipulation fails are offered arthroscopic capsular release.

If arthroscopic release fails to relieve symptoms, open release of contractures has been recommended, with emphasis on release of the coracohumeral ligament and reestablishment of the interval between the supraspinatus and subscapularis.

Arthroscopic release is an option when closed manipulation fails or for patients who have had prolonged, recalcitrant adhesive capsulitis, with marked improvement reported in 80% to 90% of patients.

Lunotriquetral Ballottement Test also called Reagan Test, it is used to evaluate the integrity of the lunotriquetral ligament…